I hope you all had a fantastic weekend, and celebrated the baby-daddies in your life. Yesterday was our 17th wedding anniversary, as well, so it was doubly special celebrating Mr. SP’s vital role in our lives.

He used to be a professional musician, so traveling was a big part of our life. In fact, our love of exploring the world, and how well we traveled together, was one of the reasons I knew he was the one for me. Our list of adventures is long, but dog-sledding on a glacier in Alaska is definitely at the top!

Juneau, the capital city of Alaska, was our second port of the Princess cruise. But there was nothing bustling about this sleepy little town. In fact, there are no roads connecting the city to the rest of Alaska, or North America! It’s nestled at the base of Mount Juneau, and like Ketchikan, is surrounded by breathtaking, majestic beauty. 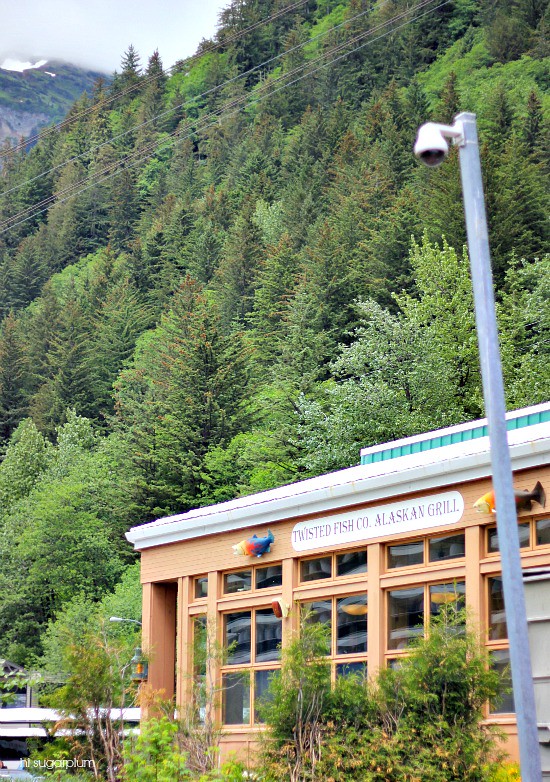 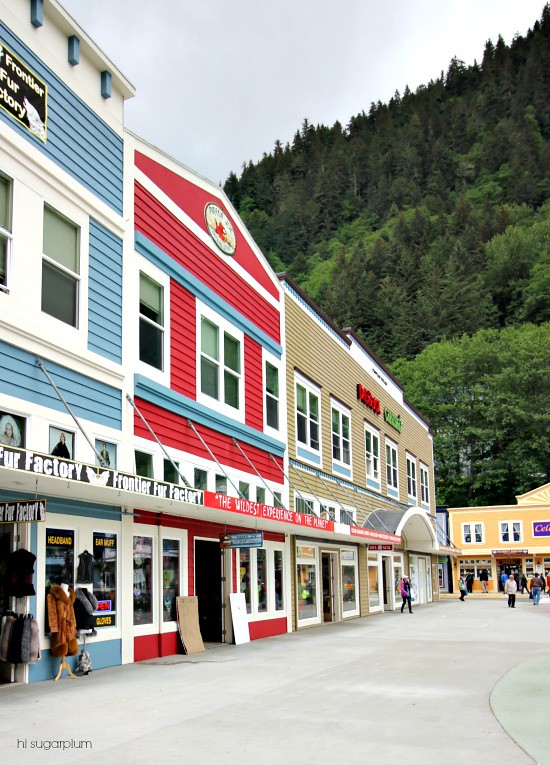 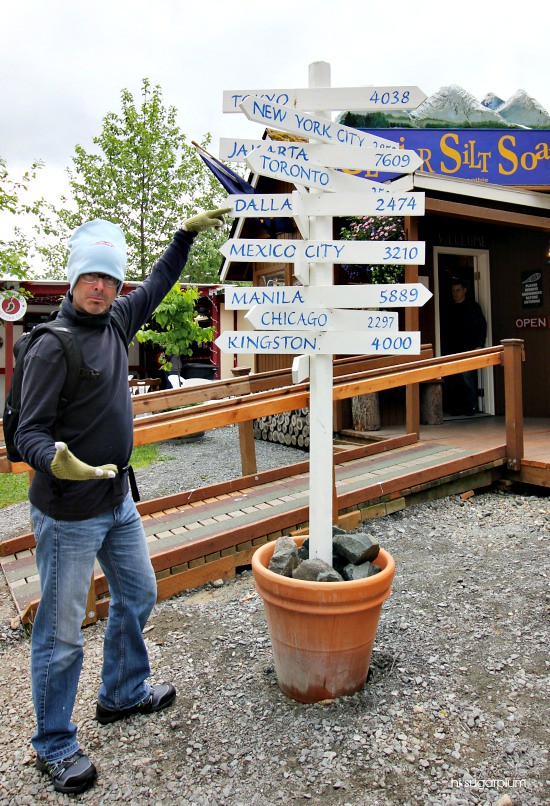 We had a few hours before our scheduled excursion, so we wandered the town, and hiked a nearby waterfall. Mr. SP has a thing for waterfalls. And southern blondes. 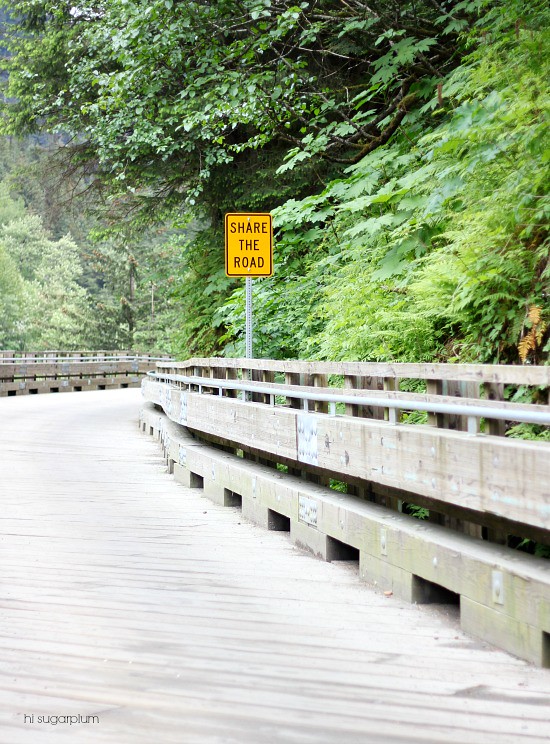 We were surprised by the mild temperatures and lush landscape growing everywhere. Not exactly the Alaska stereotype I had in my mind. 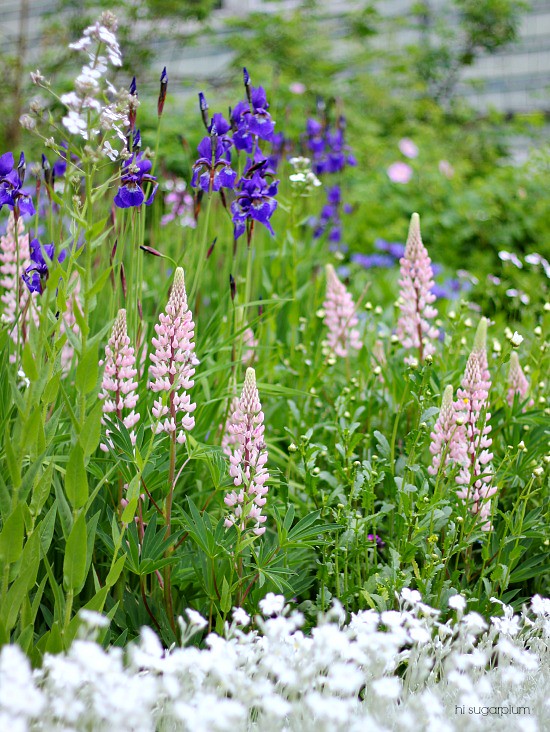 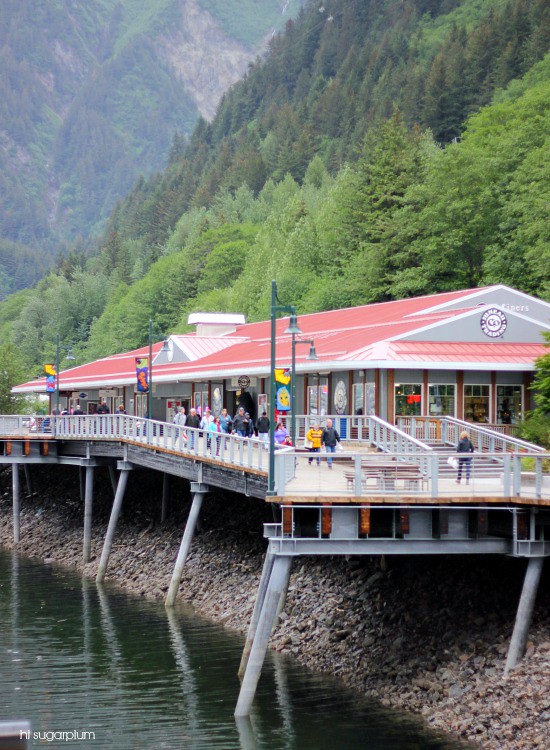 Pictures don’t come close to showing how stunning this place is…nor how grand. Mountains and trees tower and soar to the sky everywhere you look. To give you an idea of scale, note how small our 17-story tall cruise ship looks (at the base of the middle mountain) in this picture I snapped while taking off in the helicopter. 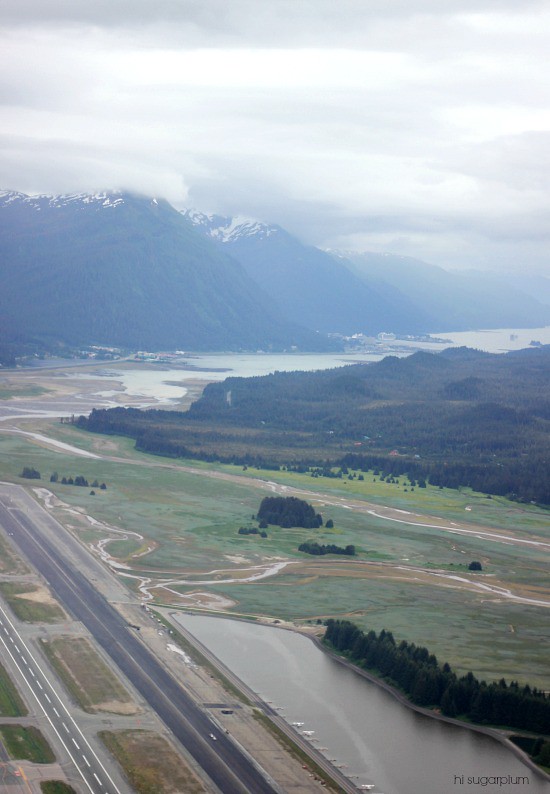 That’s right….helicopter!! Our excursion was a tour of the Juneau Icefield by air, then we landed on the Mendenhall Glacier for dog-sledding! #canyoueven 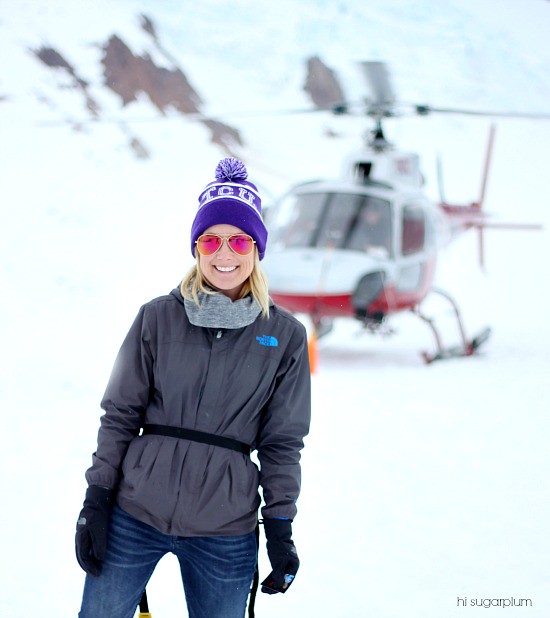 Again, my photos don’t begin to show the scale…but you could easily park a school bus in each of these ice crevasses. 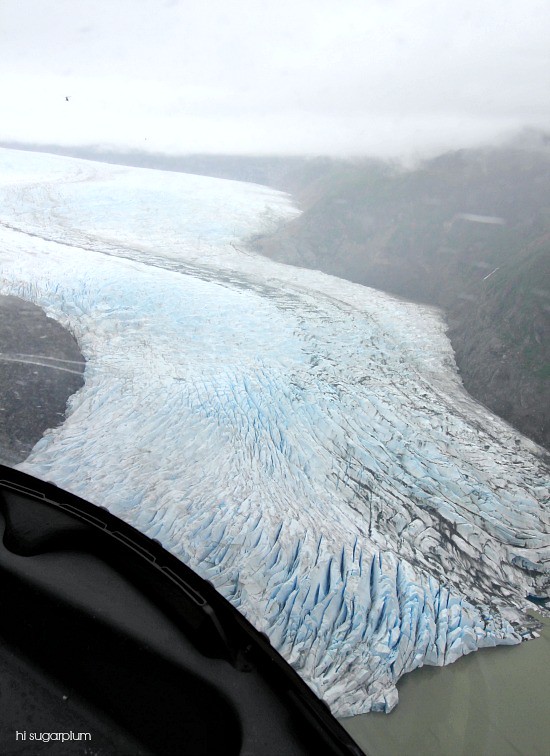 Glacier ice is the most magnificent shade of blue…especially when melted…and even though it was a cloudy day, it was blindingly bright on the glacier. 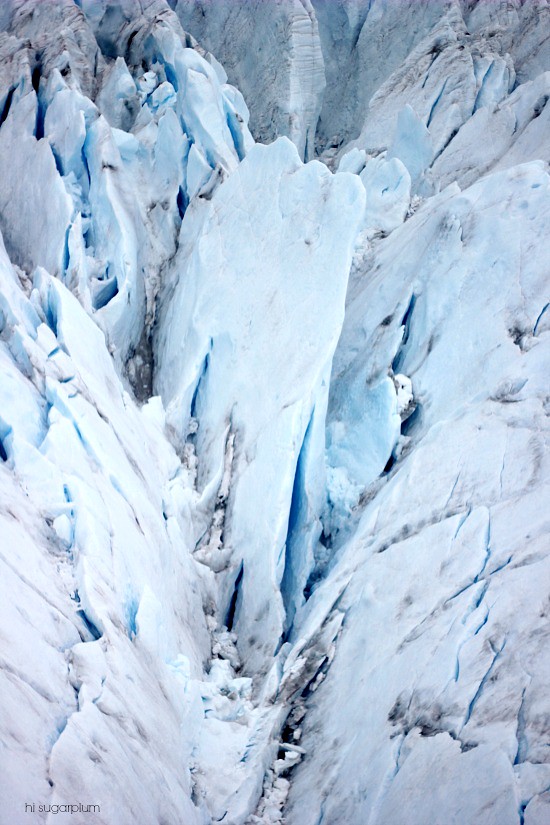 I had some reservations about dog-sledding….I was worried I’d feel bad for them being tied up and forced to drag us lazy humans around. But the moment we landed at base camp, it was obvious these Alaskan Huskies are born to run…they were literally begging to be harnessed for their turn on the track. In fact, any time the sled stopped, they’d all strain and leap, while barking and howling to get going again. 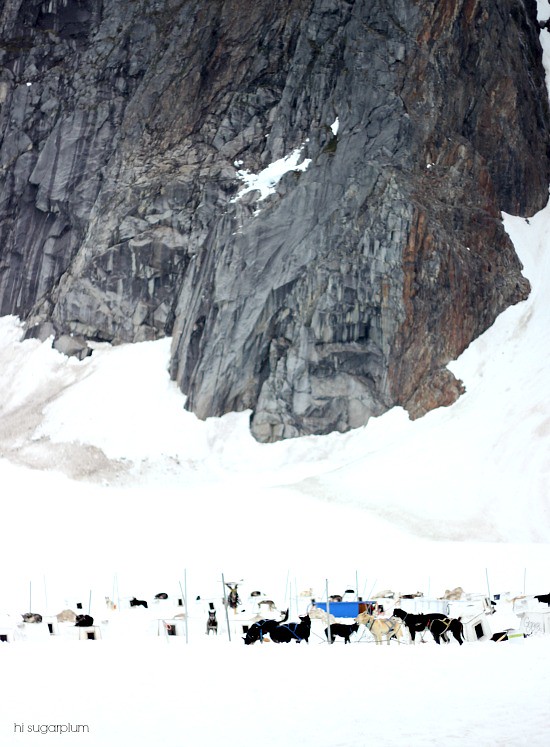 They were smaller than I expected…ranging from 45-70 pounds…and though most were sweet, there was a definite ‘wildness’ to them…almost wolf-like, with thick, course coats to withstand Winters in Alaska, and the long, 1000 mile Iditarod race. 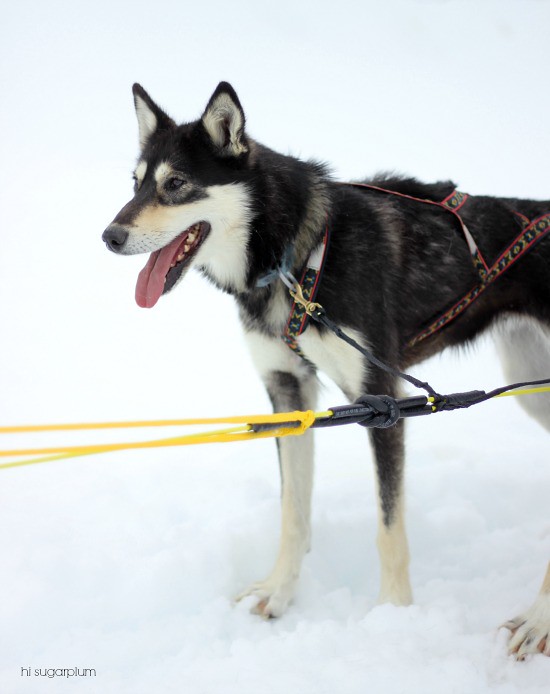 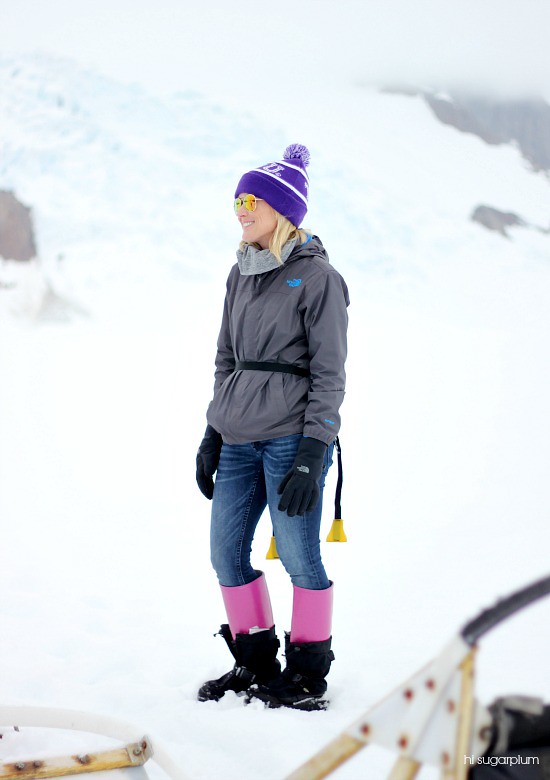 Twenty mushers live in tents at the camp for five straight months, (with no electricity, plumbing, or running water) training and caring for the nearly 300 dogs! Supplies are brought up on the helicopters, and mushers are flown to ‘town’ once a week to shower. #canyoueven 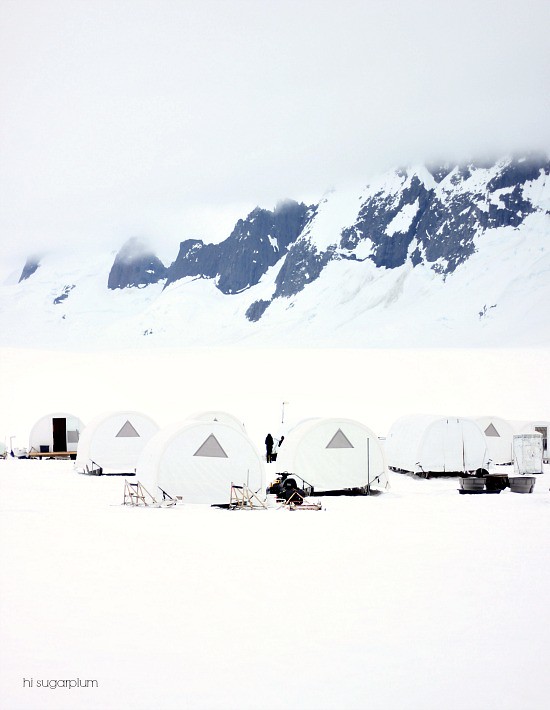 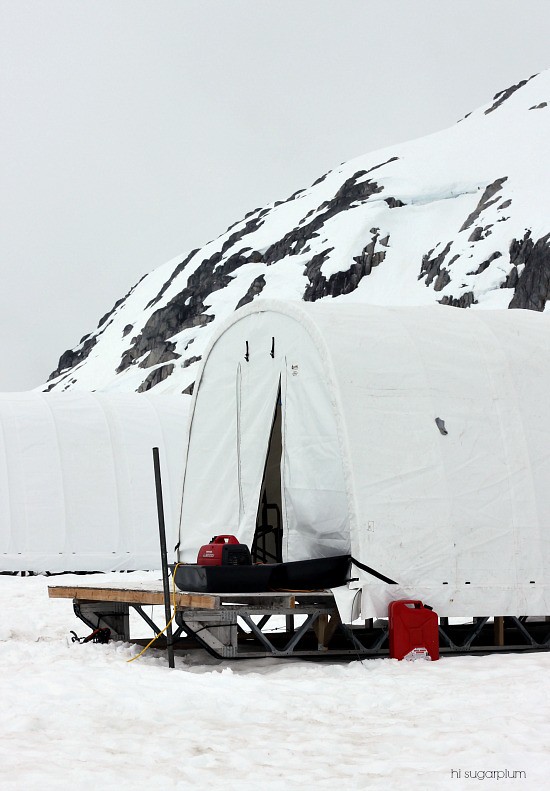 The dogs pulled us in the sled, then we took turns in the driving position….I think we all had perm-grins the entire afternoon. 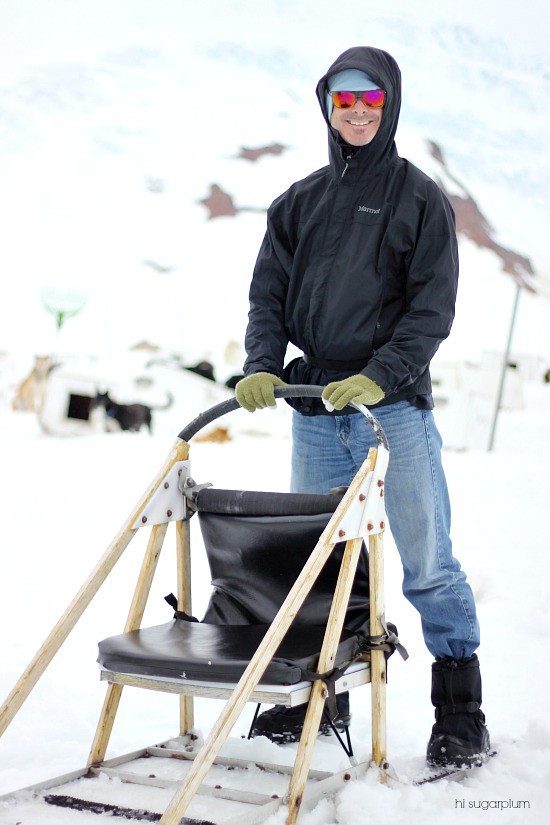 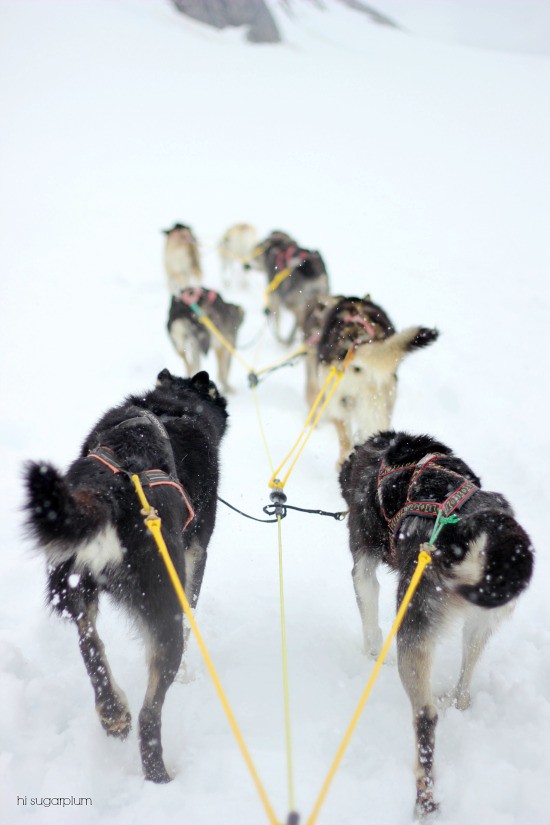 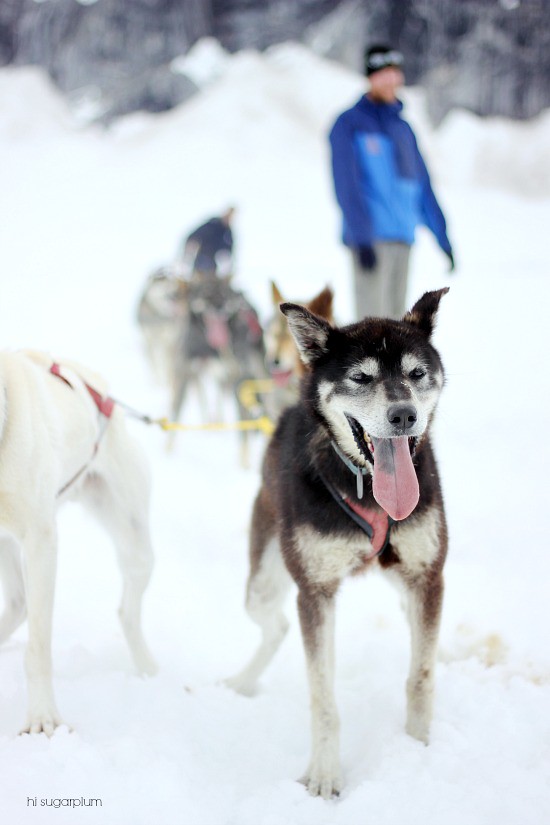 Note the sled with 12 dogs and 5 people in the middle of this pic….see what I mean about grand scale?! 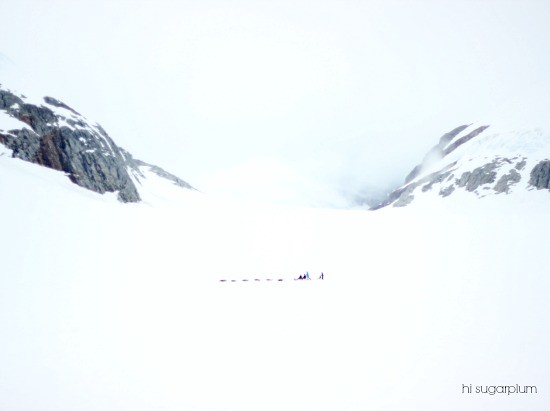 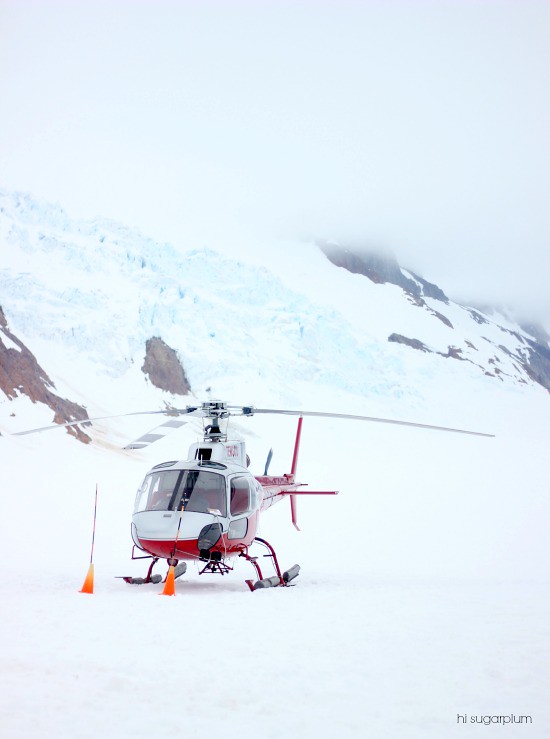 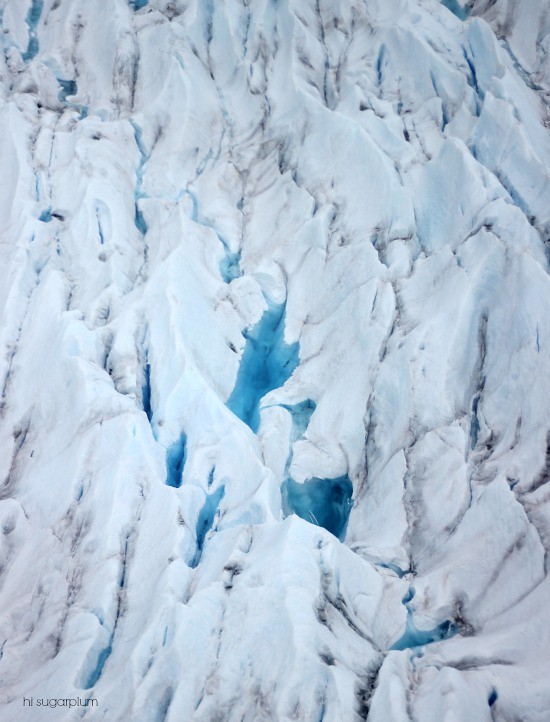 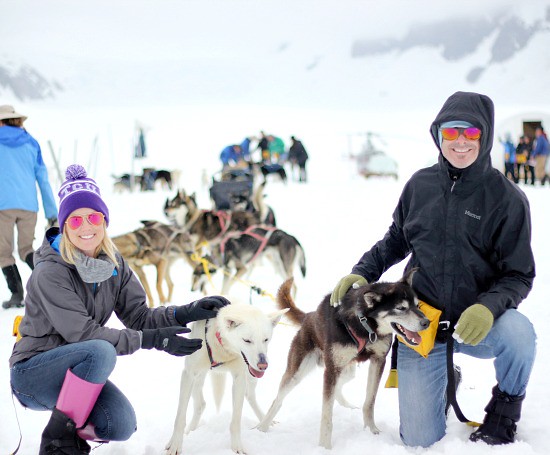 After the flight back, we boarded the ship and watched the lights of Juneau grow smaller from the top deck, before dressing for dinner. 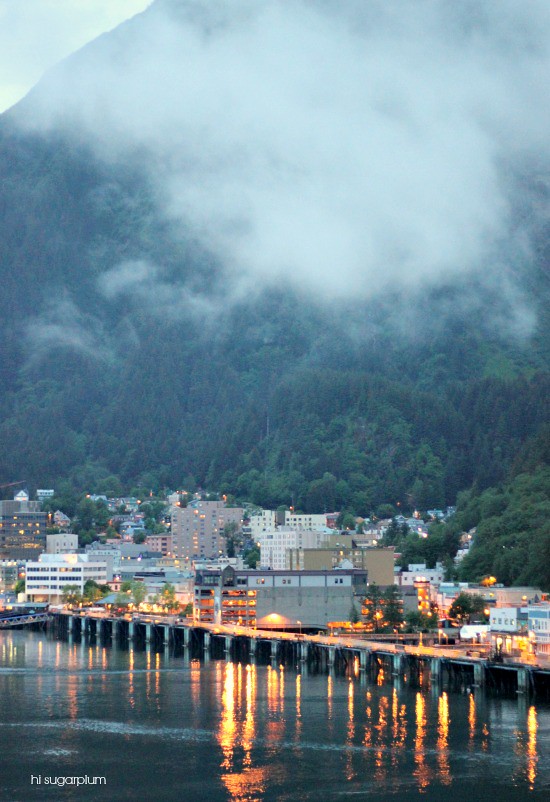 Definitely not a day we’ll ever forget! The ‘Bucket List’ type excursions are pricey, but absolutely make the trip. Is Alaska on your Bucket List yet?

I’ve got a few more recaps planned from the trip, along with a packing list, but feel free to ask any questions about cruising Alaska in the comments, and I’ll answer them in a future post!