You guys were so kind and excited for our Better Homes & Gardens Refresh feature, so I thought you might like to see some of the behind-the-scenes action! The whole thing had to stay hush-hush until published, so all I have is quickie phone pics of the days they were here…but still fun to see all the work, and mess, that goes along with a major magazine photoshoot! 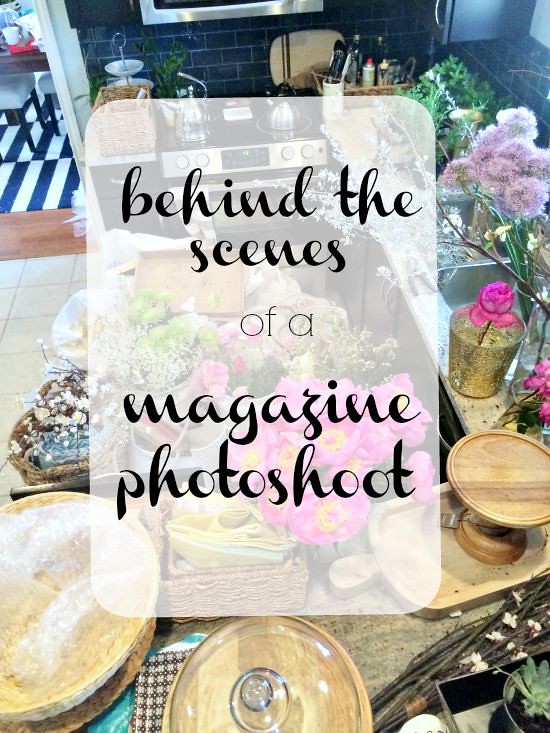 You may recall the timing wasn’t exactly ideal, since we’d just sold our house when we got the call! But I’ll start at the beginning for those who like to hear it all.

How did this whole thing happen? Did you email them or they email you?
Last Summer, I received an email from Mark Lohman, a photographer who was shooting for a magazine in my area…he found my blog, and wanted to come scout my house while he was in town. We were only half-way through the majority of the room makeovers at the time, but he insisted none of that mattered.

Most scouts and photographers actually work freelance, so he sent off his informal pictures in hopes that one of the magazines would be interested in picking it up. Fortunately for us, field editor Andrea Caughey was immediately a fan and worked tirelessly to get us published. We got the word in July that Refresh wanted us!

Then what happened?
Andrea called early August and said they wanted to shoot right away, and could we make mid-August work? “Um, actually, we’re on a near-deserted island for almost two weeks, and there’s not a finished room in the house, but, um, maybe?” was my response. Fortunately Andrea had more sanity than me, so she pushed the shoot back to ‘September, or October at the latest!’


So you actually shot it last year?
Not exactly. We returned home from our trip, and started busting out all the project lists, working our way from room to room. Nothing like the prospect of a major magazine photographing your house to get shizz done! September became October, then October became November. Each month we’d get word that they were ‘close’…and to make sure and keep our house ‘seasonless’. What?! It was Fall and Thanksgiving, and I’m a blogger!! We’re supposed to decorate our houses with pinecones and plaid…it’s what we dooooooo!

But turns out Refresh Magazine was undergoing an internal overhaul, so there was a pause in new shoots. At this point, I mentally moved on and figured it would work out if it was meant to be. Oh, then we accidentally found a new house and decided to move.

Just get to it and tell us how it finally happened!
That’s not a question, but whatever. We signed the contract on our new house, with a closing date of December 31, and literally the next day we got word that the shoot was on….for the end of January! Then to further our shock, we sold our house in a day…and the new owners wanted to move in January 15!

But I we weren’t about to miss out on such a great opportunity to have our home featured, so we did a lease-back from the new owners until after the shoot. (You can imagine my conversation with Mr. SP about why we needed to maintain two houses, right?!) Which means we couldn’t move, or even pack a single box, until they were done. Which also turned out to be a good thing, since it allowed us time to remodel the new Kitchen! Or so I reiterated to Mr. SP. Frequently.

So long story short…we bought and sold a house, prepared for and hosted a photoshoot, remodeled a Kitchen, packed, and moved, all in the span of eight weeks. It was as crazy and exciting as it sounds. And I wouldn’t change a single thing about it!

Did they bring a lot of stuff?
The talented stylist, Donna Talley, was so considerate of me and my style, and called several times to see what additional props I had on hand, and to get a feel for what I liked. She arrived the day before the shoot with an SUV bursting with decor, and the most beautiful flowers I’ve ever seen (flown in from California…it was, after all, January in Texas). That was the last time I could walk in my Kitchen for the week. 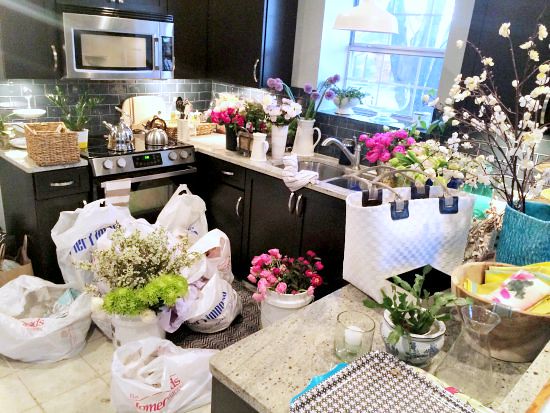 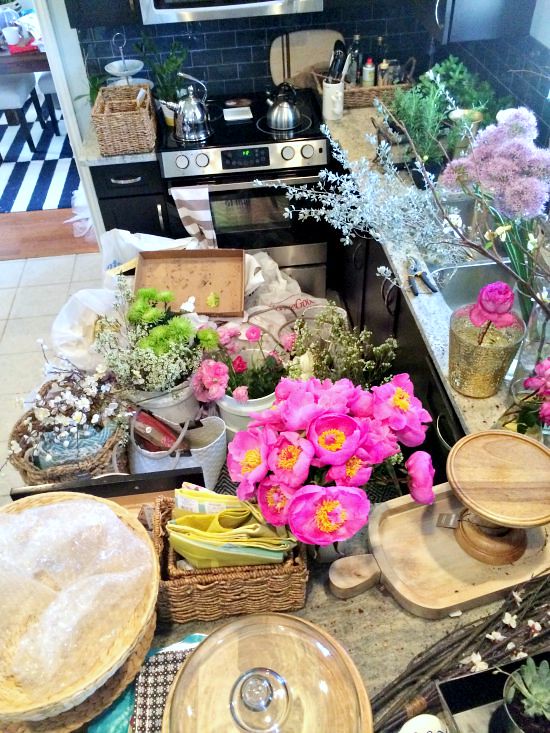 How long did the shoot last?
This was another ‘funny’ twist. Initially they scheduled two days to capture 16 shots (8 rooms)…then they decided it was a ‘strong cover option’, so they added a third day for cover tries. Then Kitchens & Baths Makeovers magazine wanted to feature it, too, so a fourth day was added for 8 more Kitchen shots.

If you’re counting, that left us with six days before the movers arrived. Thank goodness for our moms!

Did you have a say in what outside props they used?
Donna would ask if I liked something before using it, but since she’s the pro, I left most all of it up to her. 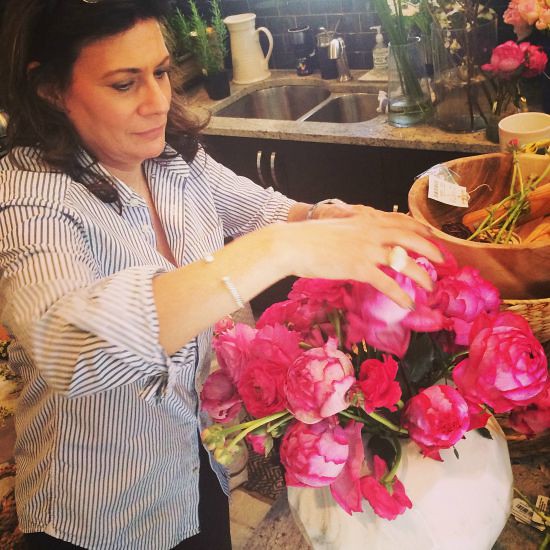 Did you know what rooms they were going to shoot ahead of time?
A few weeks prior to the shoot, they sent a detailed shot list, with images from my blog and the scouting session. It outlined every shot and angle they wanted, along with the style and feel they were looking for in each image….down to the type of flowers they envisioned.

Several of the images were so old, the space no longer looked the same, so I had to send updated images for them to approve. Fortunately, they loved everything we’d done since the initial scouting six months prior.

What were you most surprised about?
The mess! I literally had to disconnect myself from the house and fight the urge to tidy. By the time the stylist brought in her supplies, and the photographer his gear, we could barely walk through the house.

Then, in order to set-up a shot, virtually everything in that space had to be moved out. So while the shot looked like this… 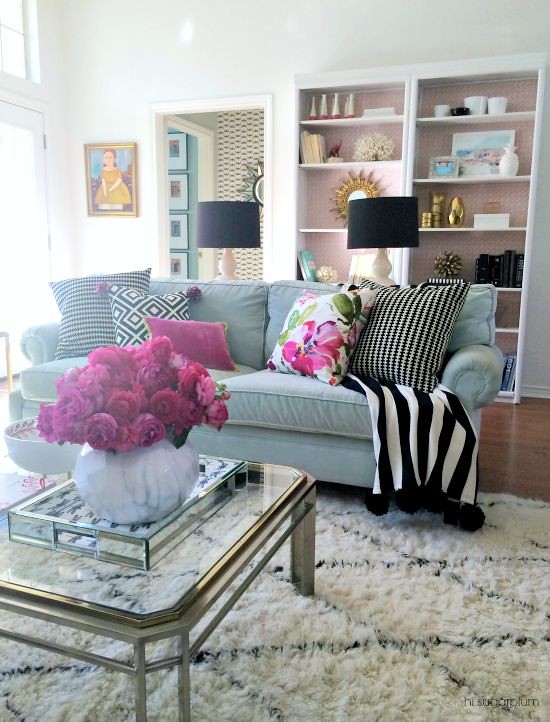 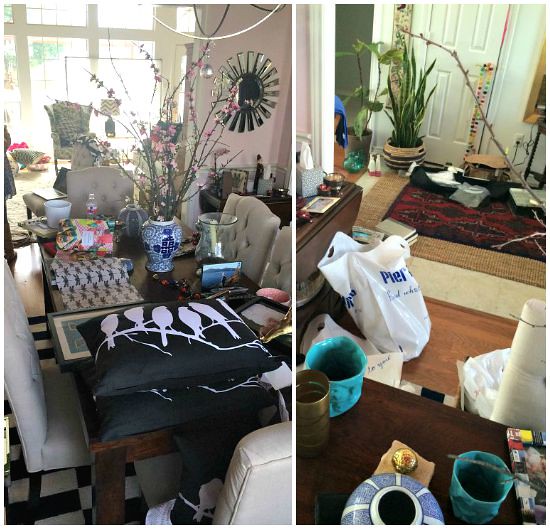 I was also surprised by how many people it took to create such beautiful spreads! 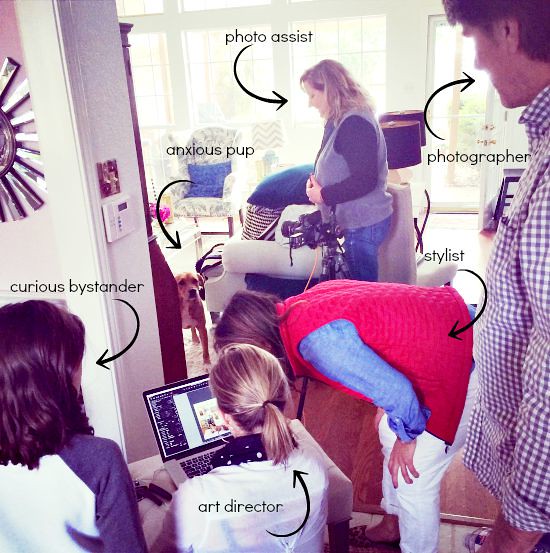 Did you get to keep any of it?
Nope, it all had to go back…with the exception of the large white vase they used in the cover shots. I bought that from the stylist as a keepsake. But we did get to keep all the flowers, so my house had never looked, or smelled, better. It was like Oprah’s house up in there.

Sidenote: The ‘cover tries’ is a full day dedicated to creating the perfect potential cover…in our case, that meant styling the sofa and shelves with 8 different pillow and prop combinations. This was my favorite. 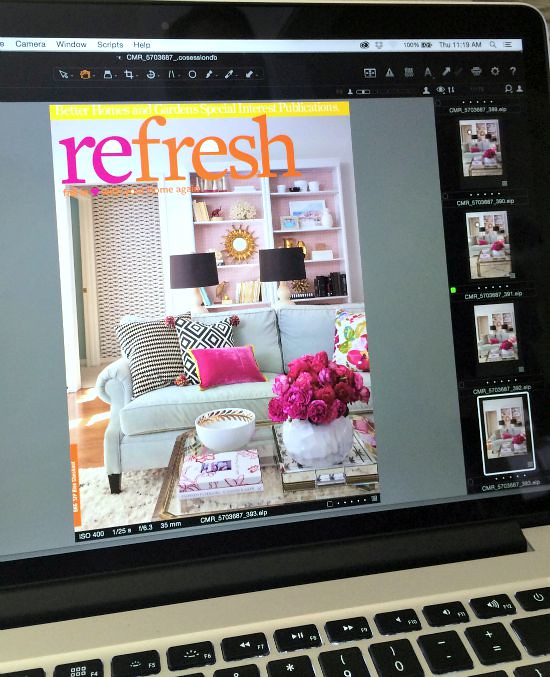 What happened after the shoot?
Several weeks later, I received all the rough shots and sourced everything in each image. That means I detailed where every last pillow, lamp, rug, tile, and DIY project came from, along with dimensions and contractors of the Kitchen remodel. That’s what they use to create the Source List at the back of the magazine. 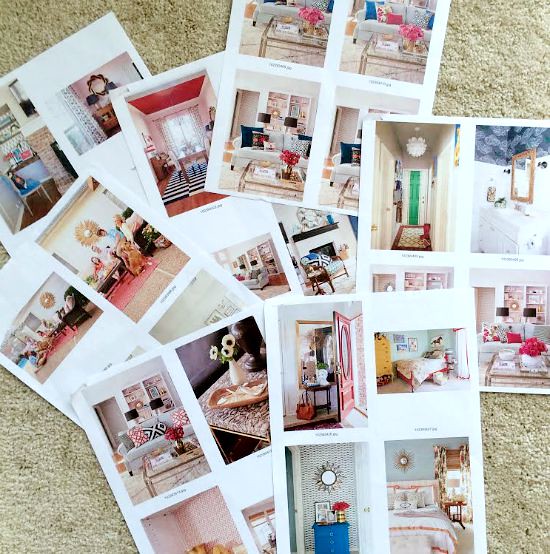 Were you paid?
No, there’s no compensation…other than experience and exposure. And a gorgeous keepsake of our home. #priceless 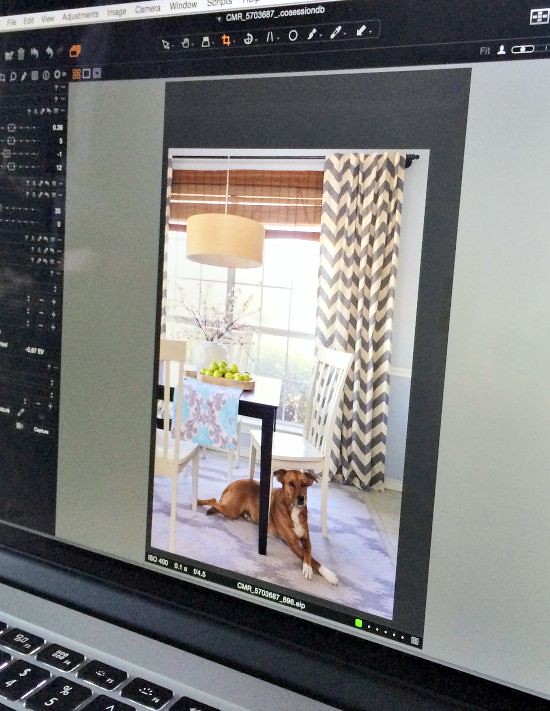 What did you do while they were there?
Mostly stay out of the way! On occasion they’d ask me to sign releases and what-not, or request more props and supplies, and I helped the photographer’s assistant to get lunch every day, but I was usually creeping in the background trying to take it all in.

After the first day though, I used the time off from work to also start packing the rooms they’d already shot. 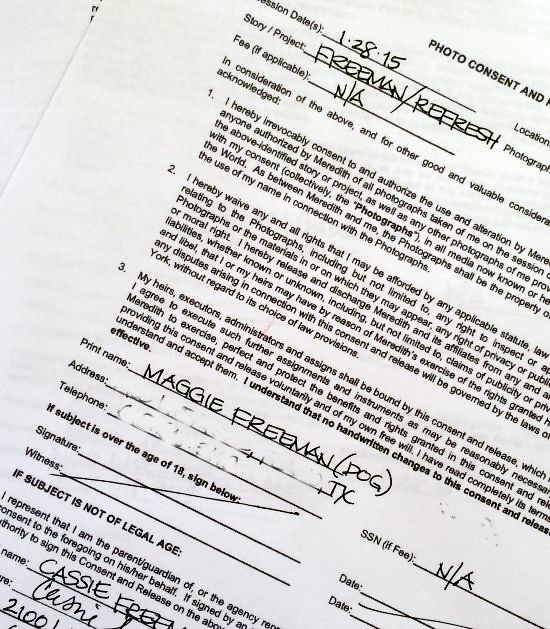 Did you learn any tricks and tips?
These guys are pros for a reason…they work tirelessly to get the perfect shot. Adding gaffers tape to the backs of shams so they stand up straight, steaming duvets and pillows, propping chairs and benches for more height, and tweaking vignettes countless times until the entire shot was just right. 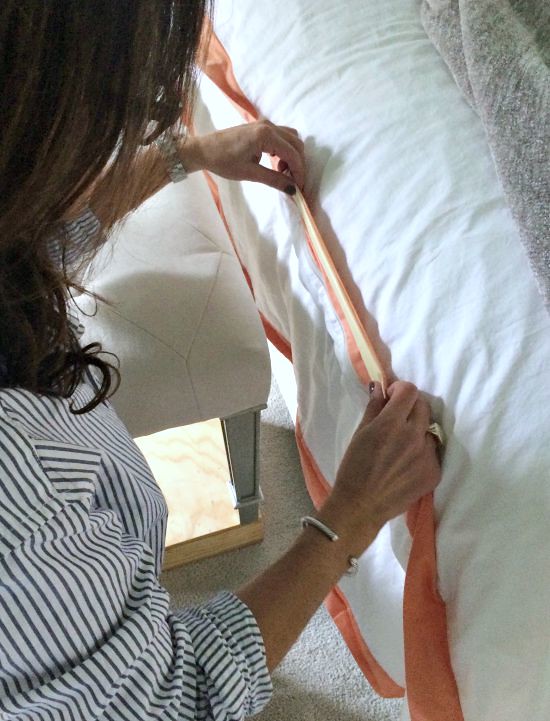 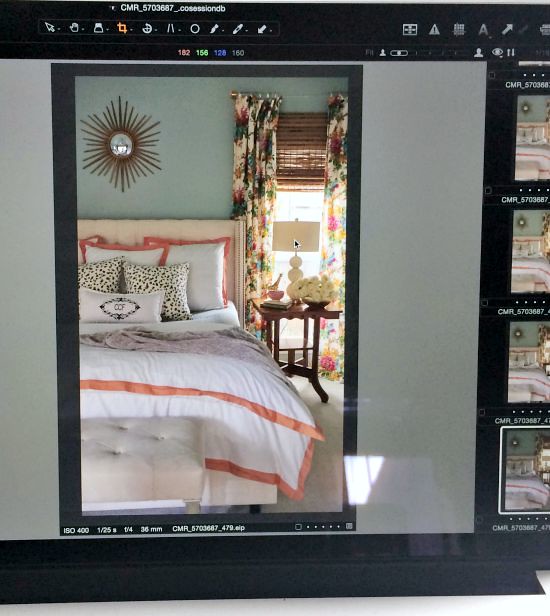 The photographer and assistant, Brian McWeeney and his wife, Carolyn, were enormously talented and even managed to make my black hole Kitchen appear bright and cheery, by building an entire shantytown of reflectors. 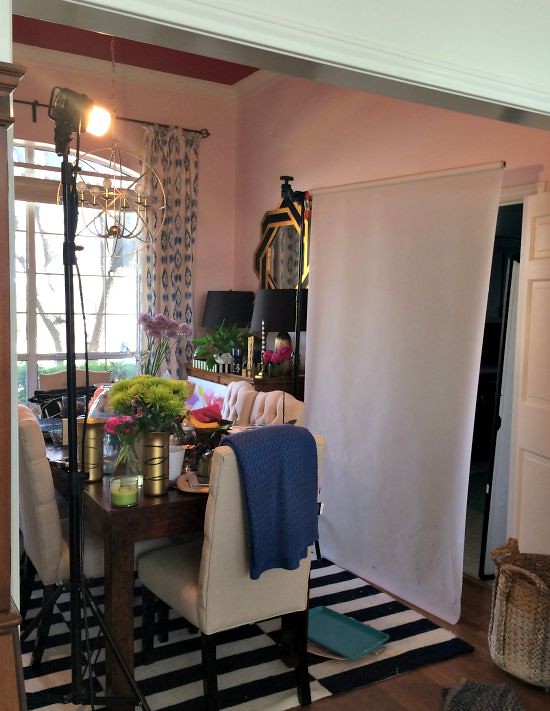 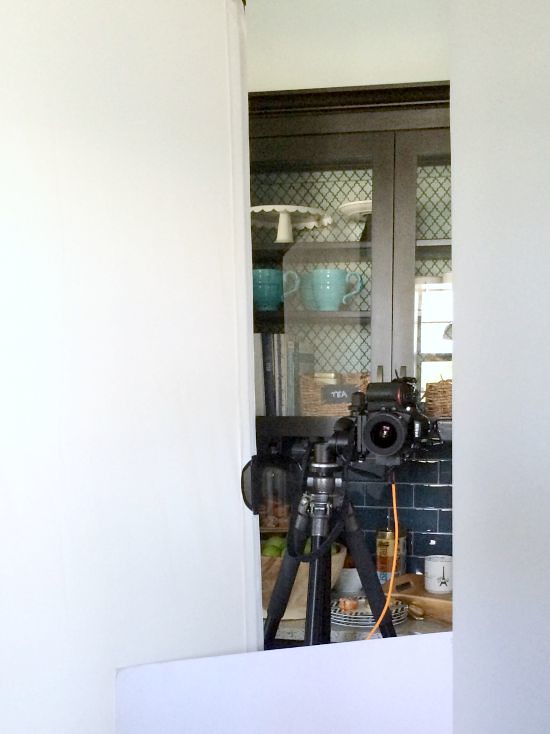 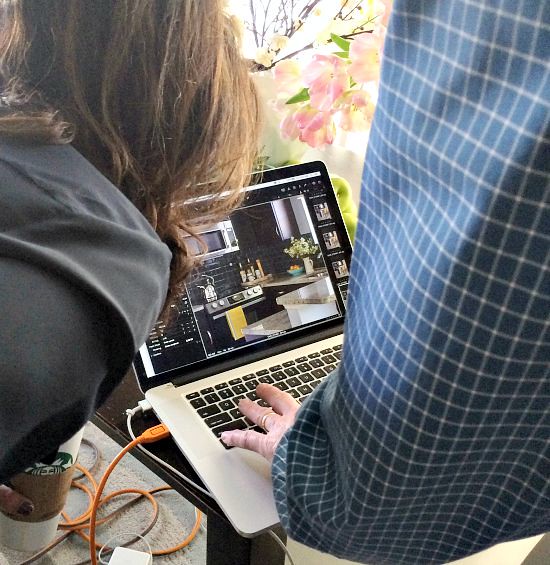 Did you spend days cleaning your house before they arrived?
Turns out, there’s nothing like putting your house on the market to get all the shizz done and clean! So we were pretty much prepared. But yes, we cleaned! I knew they’d create their own set-ups though, so I didn’t spend a lot of time making perfect vignettes everywhere.

Who chose your family’s outfits?
We shot in January, but without a firm publish date, we needed our clothes to apply to any season. We worked together pulling clothes from all our closets that both coordinated together, and with the setting of the photo. They did ask that we keep the patterns simple and layers minimal.

Sidenote: One of the poses had my sitting son on the ground at my feet…but the balance was off, so they asked me to swap places with him. Funny enough, this was the only time I spoke up…there is no chance that I’d ever be sitting on the ground, while my son had the chair. He or Mr. SP would always offer me the seat. So we found another, more realistic, and polite, option…and that’s what ended up in the magazine. Maybe it’s an old-fashioned, Southern thing, but that’s just how it is around here! #respect 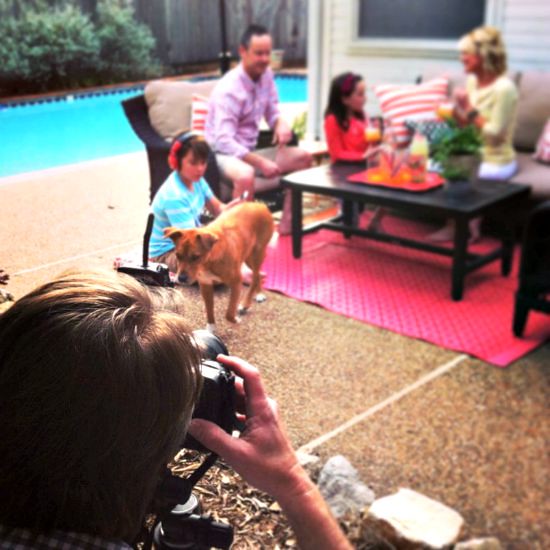 It was a long, busy, exciting, messy week….but I am so grateful for the experience, opportunity, and these crazy-talented people, along with field editor, Andrea Caughey, who lobbied so hard for us. 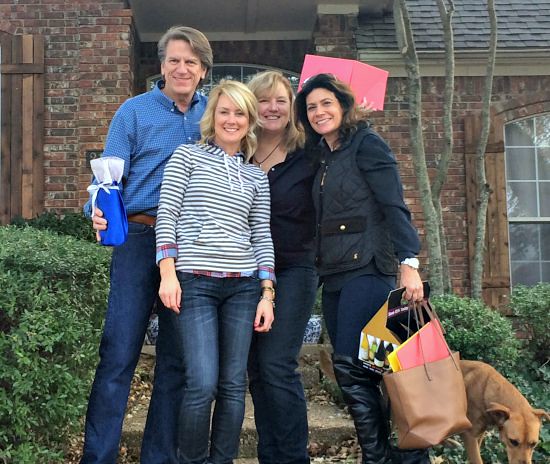 Wow! I didn’t mean for this post to get so wordy…but I’m glad I have it for the memory banks. Thank you again, darling friends, for your support, enthusiasm, and loyal readership….this absolutely would not have happened without you. #grouphug